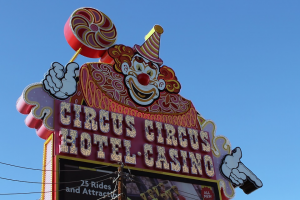 It’s called Sin City. The gambling capital of the world. City of lights – and also the city of frights! Las Vegas is so much more than slots and showgirls and magicians and blackjack. Sure, you can just walk down the strip or see the lights on Fremont Street, but that’s not always for everyone. Some people need a little more than the typical tourist spots in the city.

Why bet on red when you can bet on dead? Las Vegas may not be the first place people think of when it comes to haunted spots, but it’s full of all the right kinds of creepy (and maybe some of the wrong kinds, but we’re not covering those here). When dreams are made and shattered so deep in the desert out west, you know there’ll be some creepy ghouls and ghosts still haunting the Strip. But hey, that’s Vegas, baby. Here are the top 10 haunted places in Las Vegas.

Located at the Luxor Hotel and Casino, the Titanic Exhibit is unlike anything else you’ll find in Vegas. It features real artifacts dredged up from over 2 ½ miles below the North Atlantic Ocean, including luggage, floor tiles, and an unopened champagne bottle from way back in 1900. It’s the perfect mixture of information and entertainment, setting the stage for exactly what it was like on that deadly April night. No iceberg, though. That’s too soon.

Leo may never have stood on the Promenade Deck replica, but thousands of Titanic patrons passed by “The Big Piece”, a massive chunk taken from the side of the actual ship – and, some say, they still do. There are countless stories of those who sailed on the Titanic appearing out of thin air and disappearing right before people’s eyes, and even creating a presence in the rooms modeled after those on the ship. The frigid temperature – the same temperature these spirits would have felt on that fateful night – is only one of two reasons you’ll feel a chill down your spine here. 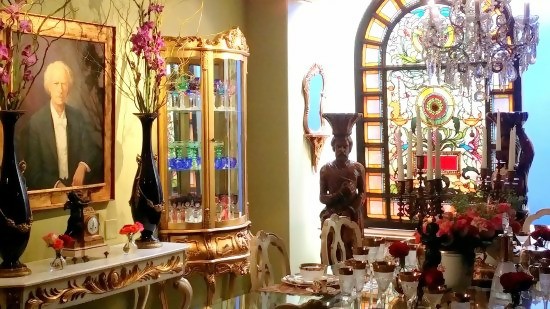 East Tropicana Avenue is home to the Liberace Museum, which was transformed from the Tropicana Club to a dedicated museum featuring costumes, pianos, and more that belonged to the famously flamboyant performer. It may also feature his ghost, which is said to have haunted his dressing room after he died. And you thought YOU knew someone who couldn’t come out without all their makeup on!

If you get hungry looking at Liberace’s wonderful collection of costumes and props (or hunting for his ghost), then try Carluccio’s Tivoli Gardens next door. Once called Liberace’s Tivoli Gardens (he originally owned and designed the place), some say they’ve seen his ghost peeking in through the windows. Also when someone said something mean about Liberace a large nearby tree fell over completely on its own. So when you go there, be nice to Liberace’s ghost, or he might be mean to whatever plants you’re standing next to.

There have been plenty of fires in Nevada, but none have been worse than the fire which spread through the old MGM Grand in 1980, killing 87 people. Afterward, it was sold and given a complete do-over, even being renamed Bally’s, though the old tower where the fire took place is still standing and connected to the rest of the new establishment.

Guests have seen odd shadows, heard strange noises that shouldn’t be there, and noticed furniture that mysteriously moves in rooms (and it’s not the maids doing it) – particularly on the floors that were affected the most by the fire. If it’s not the ghosts of those who died in the tragedy, then who is it? There are too many instances for it all to be a coincidence; rent a room for yourself and see if you can discover the truth. 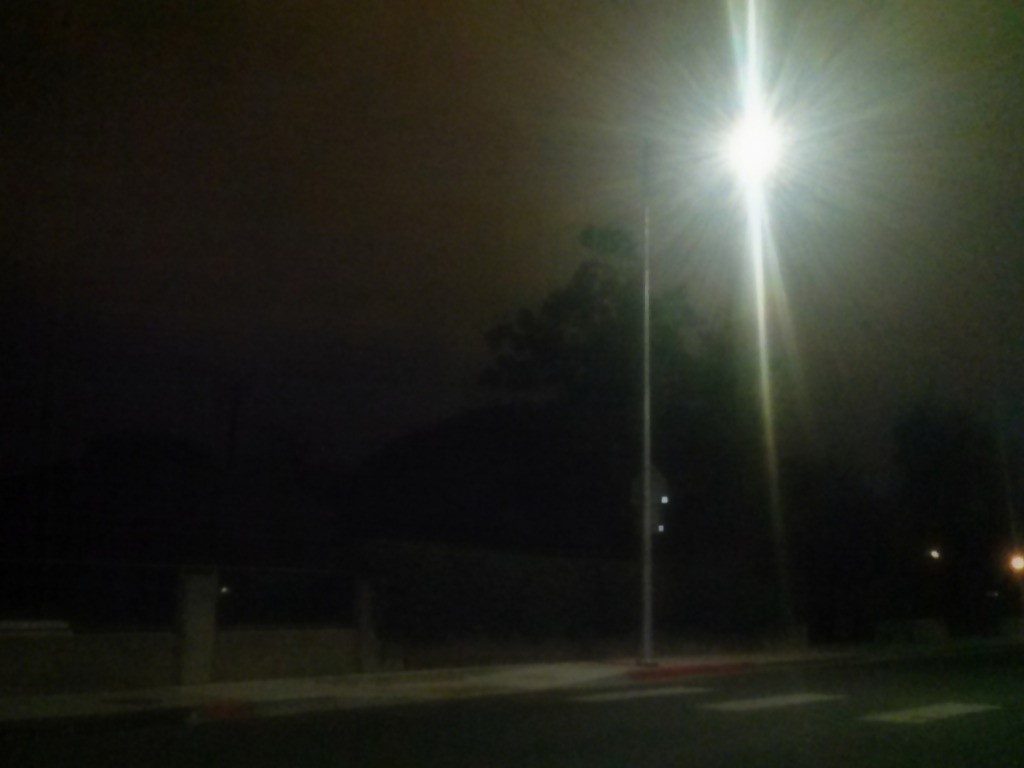 Daycare should be a place of fun, not of misfortune and death. Sadly, this daycare has seen both. First, a teacher there is said to have committed suicide. Then, a young boy tragically got run over by a toy train, killing him. While the daycare eventually got torn down, ghosts of a little boy digging with a shovel and of a quickly-vanishing woman have been seen on the property.

It’s probably for the best that this place is no longer a daycare. It’s bad enough when a child is crying because they’re hungry – who knows how bad they’d cry if they saw ghosts. But you’re no baby, so maybe you won’t cry if you see the ghosts. Maybe.

The classic comedian and Sanford and Son actor Redd Foxx had a home near Eastern and Hacienda toward the end of his life. When Redd promised to stick around after his death, people may have thought he was just telling another joke – that is, until odd things began happening in his former home.

Later homeowners have made claims of doors closing and opening completely on their own, along with sudden, inexplicable cold spots. After the property became a business establishment, the ghost of Redd Foxx has been seen playing pranks on the women working there. At least this ghost teases you rather than haunts your dreams. Speaking of which…

Combine the nightmares of your awkward years with A Nightmare on Elm Street, and you get Dell H. Robison Middle School. As if adjusting to a new school isn’t bad enough, new students report seeing a man, maybe a janitor, with bloody hands haunting the halls.

No one knows who he is or what he’s done. All that’s known is that he follows new students to their homes and even haunts their dreams. If you want him to stop haunting your dreams, the only reported way is to go to church. Religious or not, would you go to church to get rid of a ghost? 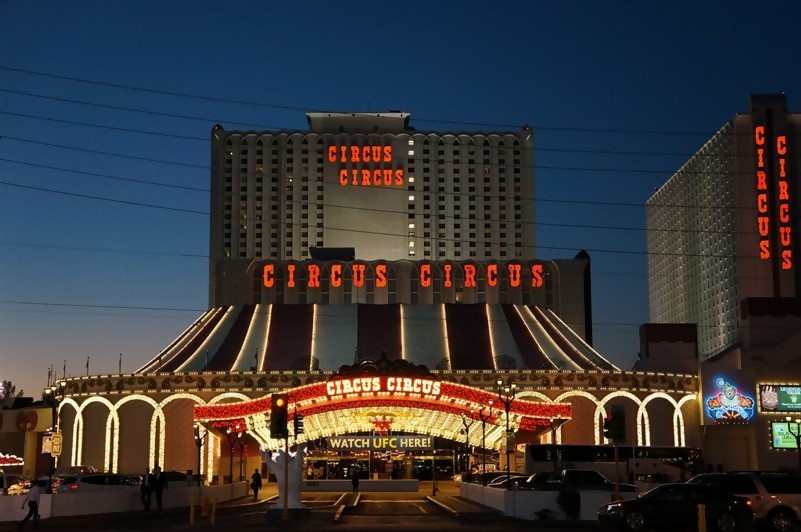 This hotel and casino is world-famous since it opened in 1968, and not only for its intriguing theme: it’s said to be the site of several murders. Perhaps the victims want to stay and play craps? Or perhaps they’re trapped – the phrase “Help me” has been seen scrawled on a mirror, and many patrons and employees have heard the same words screamed.

Not only that, but the ghosts of a young boy and his mother have been seen and heard in Room 123. Not coincidentally, that’s the same room where the mother killed her son and then herself. Oh what a circus, with three rings of spooky! 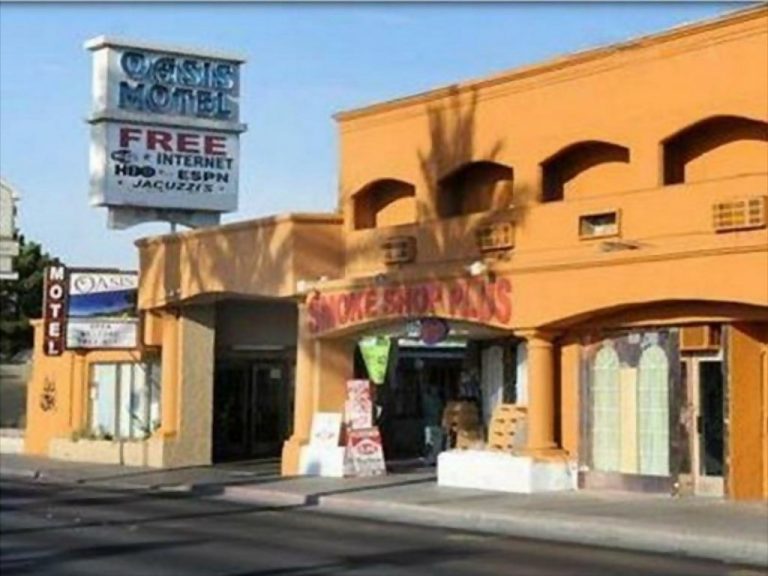 The Oasis Motel is like the Hotel California – you can check out any time you like, but you can never leave. It’s more than a cheap motel: once shut down for prostitution, it’s now better-known for people killing themselves after checking in.

Both Suddenly Susan star David Strickland and poker champion Stu Ungar checked into Room 20 and then hanged themselves, and it’s said that they still haunt the place. Are they looking for someone in particular or just the next victim? Rent a room here if you dare. 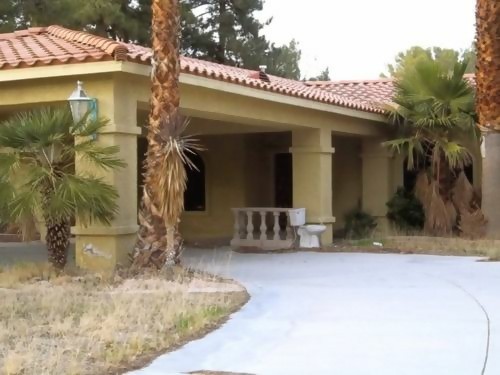 There shouldn’t be anything too scary about an older woman sitting in a chair while wearing large sunglasses – that is, unless she’s not supposed to be there and you’re in the home of a mobster who had his own murder room. We don’t know everything the original owner did, but what we do know will make your hair stand on end.

Famous enough to be featured in an episode of “Ghost Adventures”, the investigators heard banging, hissing, snarling, and singing in the home. While that’s scary enough, hearing phrases like “Not that way” and “You broke in here” will put even the hardest skeptic on edge. Maybe the “her” in the spirit’s command to “Kill her” refers to the woman in the chair?

#1 The Corner of Flamingo and Koval

The creepiness of this intersection depends on whether you believe Tupac is dead or not: this is the spot where the rapper was infamously gunned down in a drive-by shooting. Some people, fans and otherwise, have seen someone in a bandana who looks exactly like the late star. If he died, then that makes this most haunted corner in all of Vegas. But if Tupac’s still alive, then who’s this spirit? A coincidence? A doppelganger? A part of Tupac’s soul that he sold in order to stay alive? These questions remain unanswered…

Las Vegas has plenty of shows to see and sights to enjoy. You can spend your whole life in Vegas and not see everything the city has to offer. But what about someone’s whole afterlife? Come see these haunted spots and more for a fun time in Vegas like nothing else in the city! After all, what’s stopping you? You scared?