In Las Vegas, there are many sites that people the world over flock to. The casinos, the shows, or even some activities located in the desert outside of the city. But there is one place that you might want to check out if you are both a history buff or a fan of paranormal activity. The Titanic Exhibit at the Luxor Hotel and Resort is probably your best place to learn about the history of the Titanic. You can learn about how the boat was built, what it looked like, and how it sank on that fateful night on April 1912. If you are lucky, you may even get to come across some pretty strange paranormal activities that may be lurking around the exhibit. Do you think some spirits may pop out of nowhere on the Grand Staircase? Who knows? Now, let’s dive into the history of the Titanic and how the museum came about.

The Events Of The Titanic

The RMS Titanic was a passenger liner boat that had sailed from England and was bound for New York City. It was constructed in 1909 and set sailed on its only voyage, leaving Southampton, England in on April 10, 1912. The construction lasted nearly two years before it set sailed. The liner earned its namesake from the Greek mythology character “Titan”. It was widely believed that the ship itself was unsinkable. The Titanic itself was a ship that would only be considered a luxurious hotel for the high seas.

It was a supersized ship that had grand staircases, a ballroom, first-class cabins for the wealthier passengers, and other lower-level cabins for the more down to heel. While it was classified as an RMS ship, it also had the ability to carry mail and parcels that were being delivered from the United Kingdom to the United States. Most of the parcels and items that were to be delivered included valuable works of art that were set to be displayed in museums.

There were a total of 850 crew members and well over 2,000 passengers ranging from many occupations and walks of life were aboard the ship. When the liner struck an iceberg, it left a huge hole on the ship’s hull. What was believed to be an unsinkable ship sunk to the bottom of the North Atlantic in the early morning hours of April 15, 1912. As a result, more than 1,500 people perished in the disaster. More than a thousand were able to survive by escaping on lifeboats or being able to hang onto floating objects until they were rescued.

The History Of The Titanic Exhibit

The Titanic Exhibit first opened its doors at the Luxor Hotel on December 20, 2008. Given the millions that visit the city each and every year, it was destined to be a popular tourist attraction right out of the gate. It was an exhibit that would feature authentic artifacts and replicas of some of the exact parts of the ship before it sank. Also included in the exhibit was a part of the ship that was known as “The Big Piece”. This was a part of the Titanic that was recovered from underwater divers and scientists years ago.

The exhibit is measured at around 25,000 square feet. Included within the replica are some of the cabins from the first-class suites to the smaller cabins on the E deck and below. Everything is remade down to the littlest of details to ensure that it was as close to authentic as it could get.

As a visitor, you’ll get to see exactly what the Titanic looked like and get close to the real deal as possible. You will also get a chance to visit a replica of the outside promenade and get a good look at what it looked like on the night of the sinking just hours before it all happened. Today, many visitors the world over will take a look at the sights and feel the chill in the air that is at the exact temperature the night of sinking when they set foot out into the Promenade. 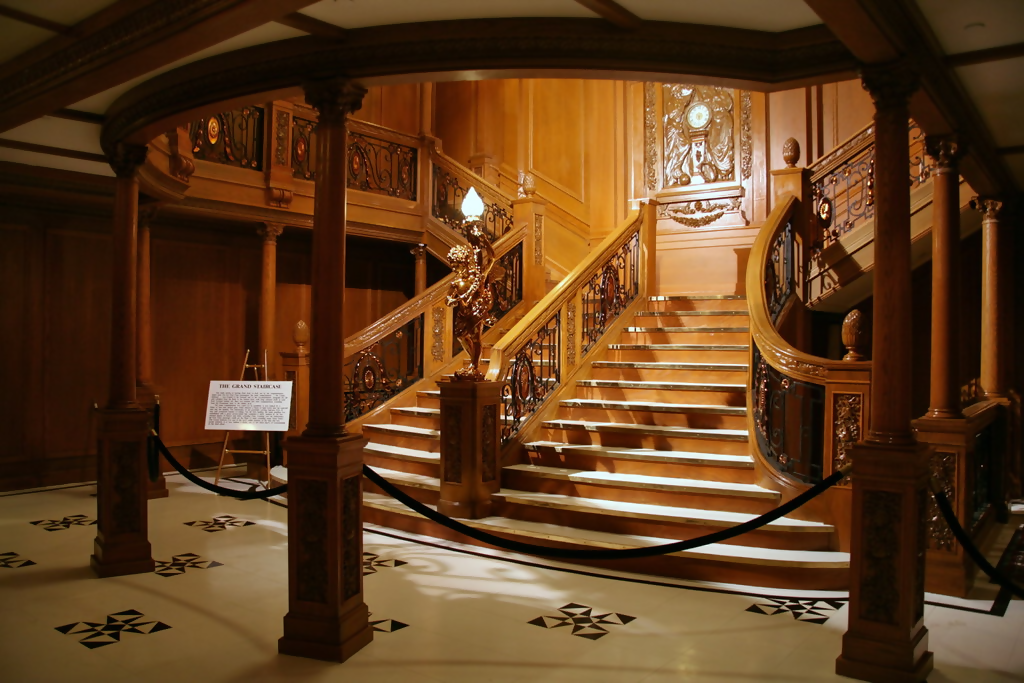 The Grand Staircase was a place where the passengers (mostly the wealthy, first-class passengers) were able to descend to dine and enjoy the sights and revelry of the grand ballroom. It was also a place that passengers were sure to use on their way down to the lower levels of the ship. If you wanted to spend time at the gymnasium, the Turkish Bath, or play cards in one of the lounges, there was no way you were going to get around the Grand Staircase.

At the exhibit, a replica of this is currently on display. It is made exactly to look like the Grand Staircase itself and sure enough, it passed the test. You will probably feel like royalty when you go up or down this staircase and experience what it was like back in 1912. 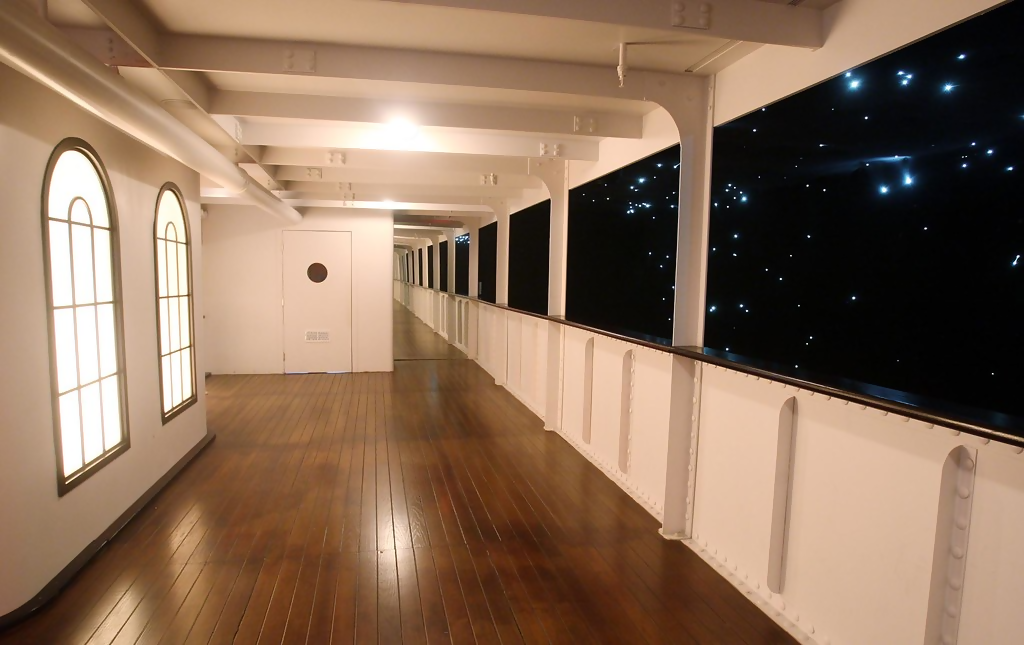 Imagine stepping into a replica of the Promenade Deck and instantly feeling the chill in the air. While it might be apparitions of the ship’s passengers, this part of the exhibit has a room temperature that actually matches the outdoor temperature that was recorded the night the Titanic sunk. This is the Promenade Deck that was located in the First Class section of the ship. Inside this part of the ship was your suites and quarters for the first-class passengers. Typically, these were the rooms where most of the wealthy and famous were residing while the Titanic was en route to New York.

The Big Piece is by far one of the best-known artifacts on display at the Titanic Exhibit. At this point, it is considered to be the largest part of the Titanic. It was recovered more than thirty years ago by diving crews and scientists. The piece is measured at 26 feet by 12 feet and weighs right around 15 tons. This was a piece that belonged on the ship’s starboard hull. It also enclosed part of the C-deck cabin. The windows that belonged to rooms C-79 through C-81 are all part of this big piece. Today this artifact is held up by steel support beams so it can be continuously displayed by visitors who will be in awe and marvel at the size of this. Until more parts of the Titanic are able to be recovered, this might be the only part of the Titanic that will be considered the largest and most important piece ever to surface from the ocean.

But Is It Really Haunted?

There have been stories that some visitors of the exhibit have taken pictures and possibly saw the sightings of some spirits appearing in a faint state. Although there are exhibits that have look exactly like the Grand Staircase and the Promenade, it would be fitting enough to see even figures and apparitions show up and disappear into thin air while walking the exhibit.

If that was not enough, some of the stories that can be told about the items belonging to the dead may be haunting enough. You never know if their spirit might be around to stand guard of their precious valuables that are now on display for all the world to see. You may even get the same chilling feeling as you’ll get while visiting the Promenade.

Whether you believe in ghosts or not, the Titanic Exhibit at the Luxor is worth checking out for all the right reasons. If you are a history buff and someone who might be interested in knowing more about some of Las Vegas’s paranormal activities, chances are you might want to pay a visit to this exhibit. You may never know what you will learn or who you may encounter during your time through here.

The Titanic Exhibit might sit right in the middle of the desert in Las Vegas. But so many stories can only be told about the failed voyage that ended in the deaths of many. While many have survived to tell stories of their own, they will still be told long after they have passed. But it’s not the survivors themselves that can tell the tales of the Titanic. It’s the artifacts on display from the ship’s rooms and the personal items of many passengers that will tell the stories without ever saying a word of their own.

However, the spirits of many of the passengers will live on. And you may be bound to see them when you get the chance to visit the Titanic Exhibit at the Luxor Hotel.