The Corner of Flamingo and Koval

In Las Vegas, the last thing we’d ever think about are the street corners. However, there is one in particular where many people seem to flock since it was the sight of an apparent murder of one of the most popular hip-hop artists of all time. The Corner of Flamingo and Koval was said to be the site where hip-hop performer Tupac Shakur (or 2Pac) was gunned down. Even after the event, there have been conspiracy theories as to whether or not Tupac survived the attack or not. Some have even gone so far to claim that Tupac is alive and well, but invisible to the public eye. However, others believe that the rap legend is surely dead and gone. Even some have seen 2Pac, but more of a specter rather than a physical being.

We will cover who Tupac Shakur was and how he rose to fame as one of the hottest rap artists at the high of the East Coast vs West Coast rivalry in the hip-hop genre. Tupac Shakur may be long gone, but the stories of what may have happened that night along with some paranormal activity may still be hanging around this part of Sin City for well over twenty years.

Who Was Tupac Shakur 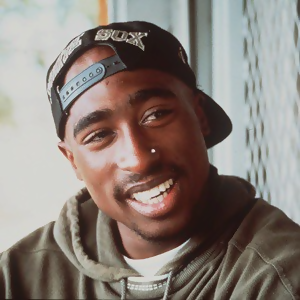 Tupac Amaru Shakur was born Lesane Parish Crooks on June 16, 1971, in the Harlem neighborhood of New York City. He was born into a family that was well known for committing crimes against the government of the United States. His relatives were mostly known for their involvement in the Black Panthers and the Black Liberation Movement. The activism of which his relatives were a part of would soon serve as a base for most of 2Pac’s most notable songs. At the age of one, Lesane Parish Crooks was now known as Tupac Amaru Shakur. His mother chose the name Tupac as an homage to a Peruvian Revolutionary by the name of Tupac Amaru II.

When Tupac was fifteen years old, he moved to Baltimore, Maryland where he would be educated at the Baltimore School for the Arts. While a student there, he studied jazz, acting, ballet dancing, and poetry. Before he was considered as one of the world’s most recognized hip-hop artists of all-time, he was reciting Shakespeare on the acting stage of his high school. However, it was rap that would be a calling that Shakur wasted no time answering.

With one of his fellow students serving as his “beatbox”, Tupac was a fixture among the hip-hop scene and ended up winning many rapping contests against fellow students. His rapping skills along with his class clown demeanor led him to become really popular among the students in his high school class. One of his close friends while a student at the Baltimore School for the Arts was future actress Jada Pinkett Smith.

In 1988, the Shakur family were once again on the move. This time, they headed west to Marin County, California just outside of San Francisco. He attended Tamalpais High School in Mill Valley, California where he took part in several drama productions. He also had a special talent for poetry and writing in general. This was evident when he wrote a paper for an English class entitled “Conquering All Obstactles”.

Shakur took on the stage name of MC New York while he was starting out with his rap career. Shakur began recording songs in 1988, but it was mostly underground work and was not known to a mainstream audience. He would manage to keep his craft sharp until he joined a group known as Digital Underground in 1990. His debut would come in the form of being a member of the group when Digital Underground did the song entitled “Same Song”. The song later appeared on the soundtrack to the 1991 film “Nothing But Trouble”.

The following year, Tupac decided to rebrand himself as 2Pac. And his debut album “2Pacalypse Now” was released. The album generated a lot of controversy despite not producing any hit singles from the album itself. Yet, historians and hip-hop critics would often point to the music in the album as having some kind of underground rap feel to it. Later on, the album would serve as inspiration for many of today’s most popular rappers including Eminem among many others.

The album contained songs that covered various topics that 2Pac believed affected black Americans on a regular basis. His rap work had come full circle considering that he was a member of a family that was often associated with groups that were involved in the civil rights movement and others concerning issues involving the African American population. His songs would often take shots at the US government (in which then-Vice President Dan Quayle would also provide his own criticism to the album after learning that it may have played a role in a shooting incident that involved a police officer and a teenage assailant).

Despite the controversy and criticism from the album, 2Pac was now one of the newest rising stars in hip-hop. His second album was released in February 1993, which did much better and rose through the album ranks faster than his previous album. Some rap music enthusiasts believe that his second album was perhaps the reason why he was placed on the map initially.

Rise To Fame And The Formation Of Thug Life

In 1993, 2Pac was enjoying his meteoric rise to fame. That same year, he formed a hip-hop group known as Thug Life. The group would release their only album known as Thug Life: Volume 1 in 1994. One of their most notable songs on the album was entitled “Pour Out a little Liquor”. This album was perhaps known for setting the benchmark of the kind of rap that would be best known as “gangsta rap”. One other song on the list, “How Long Will They Mourn” appeared on 2Pacs Greatest Hits album that was released shortly after his death.

“All Eyez On Me” And Death Of 2Pac

In 1995, Tupac Shakur had finished a prison sentence that had him serving nine months. Upon his release, he joined Death Row Records and formed a new hip-hop group known as the Outlaw Immortalz. He also released a single entitled “California Love” later that same year. On February 13, 1996, 2Pac released what would be his final solo album titled “All Eyez On Me”. The album was part of a three-part album deal that he made with Death Row. It actually counted as a double album that ended up selling more than nine million copies. Despite the issues that he was facing with Death Row Records, he was enjoying what seemed to be a huge personal comeback.

On September 7, 1996, 2Pac was in Las Vegas to celebrate the birthday of a friend and business partner. That night, he was attending a boxing match along with Death Row Record CEO Suge Knight. During the fight, one of the members of Knight’s security detail spotted a known gang member that had a previous altercation with a member of Death Row records. 2Pac eventually confronted the gang member along with members of his entourage (and Knight’s group) and a large brawl ensued at the lobby of the MGM Grand. While at a stoplight on the corner of Flamingo and Koval, a dark-colored SUV pulled up alongside Shakur as he was the passenger in Suge Knight’s BMW Sedan. The unknown occupants of the SUV later fired several shots at the vehicle. 2Pac was shot twice in the chest (with one bullet ending up hitting one of his lungs), once in the thigh and another bullet in the arm. He was rushed to University Medical Center of Southern Nevada where he would eventually succumb to his injuries six days later.

The Haunting Of Flamingo And Koval

While the murder of Tupac Shakur remains unsolved to this day, there have been conspiracy theories surrounding whether or not Tupac Shakur actually survived the attack. However, Tupac is said to be a common sight as a figure sporing traditional head bandana and disappearing into thin air a few seconds later. The spirit of 2Pac not only lives on in the rap music of those who were inspired by him, but his specter could very well be something you would be bound to run into if you ever go to Vegas.

Many fans of hip-hop will only know of the place where 2Pac was allegedly shot. But if you do believe in ghosts, he just might happen to haunt the same corner where an unknown number of assailants have gunned him down. If he’s not on the corner of Flamingo and Koval, it’s probably likely he’s haunting those who may have led him to his unexpected death.