Las Vegas is home to many of the world’s most popular tourist spots. Casinos, hotels, and even some homes of the world’s most famous celebrities are often filled to the brim with visitors from the world over. But how many of them are considered haunted? Sin City has quite a handful of those. Even the city might have some ghostly presences hanging about in most places like the Strip or even near the hotel room you might be staying at. But what if you visit one of the many beautiful houses that was once owned by a celebrity or even a mob boss? We’ll be taking a look at the La Palazza Mansion and the sordid past that it had that would write the story on how it became one of the most haunted places in Las Vegas. 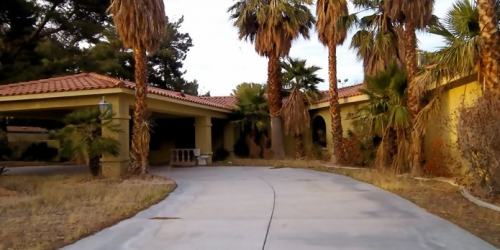 The La Palazza Mansion is located on 1700 Bannie Drive in Las Vegas. Currently, it appears to be on the market for sale. The going price for it as of this writing is said to be just a little over $1.1 million. For many wealthy investors, it might be a place that has a rich history. If you have that much money, you probably wouldn’t mind spending that much on a house that may already have additional “residents”, would you?

The house was built in 1959 and had undergone some renovations over the years. The last known renovation to have happened was October of 2017. This house has a Spanish-style hacienda flavor to it that is usually common in most luxury homes located in the Southwestern United States. But who lived inside the house that made it a haunted place for visitors to check out? Rumor had it that a mob boss had purchased the house years ago and had carried out many attacks and murders inside the home itself. Enemies, gang members that were insubordinate to the boss, and many others may have met their untimely demise in the La Palazza Mansion. But the specters themselves might still be around creating all kinds of ghostly terror.

A House Of Mob-Like Horrors 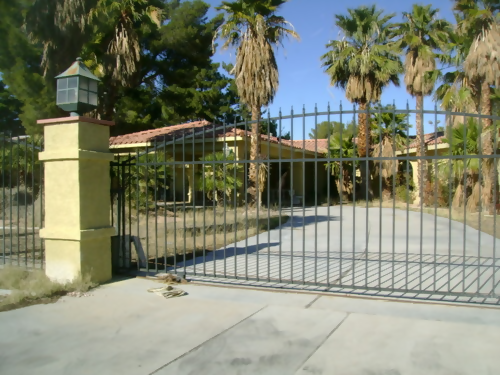 While Las Vegas had a mob presence during the golden years of the city’s explosion of casinos, hotels, and entertainment options, the behind the scenes events of Sin City’s organized crime network was said to have happened here in this home. Those who disagreed were taken to a nearby room where they were killed. Some visitors of the home might have recalled seeing blood covering the walls. Even one interesting spot that some ghost hunters recall seeing while exploring the home was a random drain sitting in the middle of the floor in one of the rooms. Needless to say, it wasn’t some kind of bathroom.

At one point in time, a couple had purchased the home and were treated harshly by some of the other “residents” in the home. On the first week, they hosted a dinner party with friends. That’s when the hauntings began. At one point during the party, they saw a wine glass get pushed off of the counter and shattered on to the floor. Beyond that, they had recalled hearing hissing noises, the shouting of obscenities, and words like “you broke in here” and “kill her” were said to be heard in adjacent rooms. One other resident was said to be taking a shower and had often heard some other obscenities coming from nearby. The residents had since left and were said to have felt quite uneasy about the events that occurred while they were living inside the house.

No other known residents have purchased the house since. Since it had been on the market for a few years, the price seemed to have fluctuated over time. But only someone who is crazy brave and has enough cash to throw around might purchase a place like this. While it may not be known who the mob boss that purchased the house is, a home with such a sordid past can only be torn down or renovated in order to get rid of the evil specters that seem to invade the home.

Another resident prior to the couple was known to not believe in ghosts and paranormal activity. However, he did recall hearing sounds coming from the attic. He could only describe them as buzzing noises as if they were coming from some kind of radio transmission.

Secret Rooms Of Murder And Another Ghost

The mansion is known for having some secret rooms. Past visitors of the home would often come across them by complete accident. It was rumored that these secret rooms were places where murders would take place. Most of them were so gruesome that blood can still be seen on the walls of some of these rooms. However, the home had long since been stripped down on the inside (perhaps associated with one of the more recent renovations). But these secret rooms came quite in handy whenever the unknown mob boss was busy entertaining guests and associates. It was also rumored that some of these murder rooms were colored all in white and had drains located in the middle of the floor, possibly to rid of any evidence in the event of a murder investigation.

There have also been spirits looming around that have not been murdered. It’s been said that the ghost of an older woman wearing oversized sunglasses is said to be sitting out on the porch smoking cigarettes. It was said that she was the bookkeeper and money counter of the mob boss. It was also rumored that she was a relative of the mob boss (some saying that she was his mother). It was said while she was well known among the higher ups in the crime family, she typically kept her money counting activities a secret and would often hole herself up in the attic of the house. She did this as a way to avoid the police from noticing anything suspicious (i.e.–large stacks of money). Typically the police would regularly patrol the Scotch 80s neighborhood of Vegas since it was considered to be a high-end neighborhood, but one of the hotbeds of some major criminal activity. If you think she was the most harmless specter of the bunch, you could not be any more wrong. She was known for being nasty, drinking, and smoking cigars along with “the boys”. She may have also played a role in the murder room happenings prior to the dirty deed themselves. Her role in that regard remains unknown.

A Bloody Theory In Why La Palazza Is Haunted

While there is no doubt that the spirits that haunt La Palazza belong to those who may have been murdered, there may be a reason why they have remained there long after the mob has come and gone. One ghost hunter said the drains may have contained the blood of countless victims. Some paranormal experts believe that blood left behind from these murders may have allowed the specters to stick around. So it would make a lot of sense as to why so many renovations and even the possibility of tearing down the home itself might have been considered.

The La Palazza Mansion may be on the housing market for the time being. But no one would ever dare purchase the place. While the home might not be open to the public, it has long been a fixture on many ghost tours that take place in Las Vegas. If you have money to throw around and want to buy a really home of horrors, knock yourself out. Just don’t be surprised if you happen to have some unruly housemates causing all kinds of ruckus.