The Dell Robison Junior High School is located in Las Vegas, Nevada. While it is one of the handfuls of schools ranging from grades 6-8 in the Las Vegas area, it is considered notable for something else. More specifically, the stories of specters and paranormal activity. Imagine being a student at a school that had ghosts wandering around at night. It might generate some eye rolls and dismissive phrases from other students or parents. But some stories have been linked to some of the local schools involving paranormal activity. But is the Dell H. Robison Junior High School haunted? Or is it just another one of the many urban legends that lack some kind of verifiable details? We’ll talk about the alleged stories of paranormal activity at the school and how it may have happened.

The History Of The Dell H. Robison Junior High School 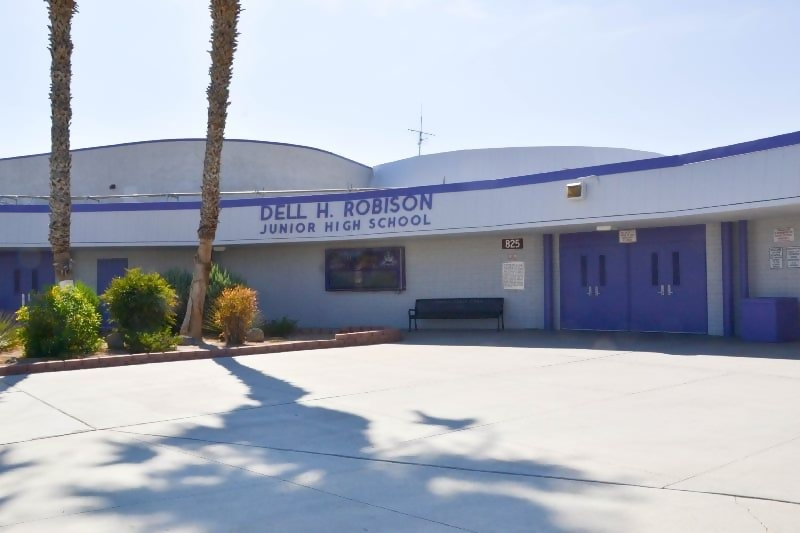 It is unknown when the school was founded. As of today, the Dell H. Robison Junior High School currently has 1,138 students enrolled from grades six through eight. The school is located east of downtown Las Vegas. It is one of a handful of junior high schools in the area. It primarily serves students that reside in the eastern half of Las Vegas and the surrounding neighborhoods. It is known for having one of the highest minority student enrollments in the state. The student body is predominantly made up of students of Hispanic descent. On average, the minority enrollment in schools across the state of Nevada is 67%.

The nickname for the school is known as the “Angels”. It is unclear whether or not it was the nickname from the beginning, but seems quite fitting considering some of the stories of hauntings that have occurred in the school’s halls.

There had been recollections from past students that described them seeing an unidentified janitor wandering the halls. Some say that the janitor had blood on his hands. One of the known patterns of these stories was these hauntings had happened when they were new students at the school, having moved in from their previous location. The reason as to why the janitor is haunting new students rather than regular students is unknown.

What is also unknown is how the specter of the janitor happens in the first place. At this point, there seem to be no known reports of any suicides, homicides, or even accidental deaths that have occurred on the school grounds. The ghost will appear at random times of the day and will often disappear.

Some of the other students even recall seeing the ghost outside of the school grounds. There had been a report that one former student that lived a few blocks away from the school would often see the ghost follow him home and then disappear out of thin air by the time the student reached the front yard. This may have been a recurring event for students at the school that live nearby it.

However, the haunting appears to stop under one possible condition. It was said that new students of the school would no longer see the spirit ever again if they decided to attend church services regularly. While seeing a spirit may be an unusual sign of telling you to go to church, it would appear that the hauntings stop when they learn about the words of yet another spirit (simply known to those in the religious communities as The Holy Spirit).

In what might be straight out of a Wes Craven film, the hauntings seem to not end for students prior to joining the church. Even with the spirit walking around the halls and following students home, some have recalled seeing him elsewhere. More specifically, in their nightmares. While the stories from students vary, they are more lead to believe that this unnamed janitor was just a ghost who happened to have passed on while employed with the school. It may be that the spirit may be sending a message of some kind. It might be unclear what the message might be. But if there was any indication at all, those who decide to attend church no longer see the janitor’s ghost. This could be interpreted as the student doing their part to help send the spirit on his way to the other side. Even if the entire student body appears to regularly attend church, the questions remain: Can the spirit still haunt the new student that has yet to go to church in his or her new neighborhood? Will it ever go away? Will it finally go to the other side and be at rest?

Urban Legend Or Did Something Really Happen?

If anything, there have been several witness accounts from past students of Dell H. Robison Junior High School. So it would make sense to not dismiss it as some kind of urban legend. But the fact that only going to church is the only solution that will make the spirit go away sounds like some kind of fable that would get more people to go to church. Anyway, you tell the story, there’s the assumption that some of the information may not be accurate.

Yet, the Dell H. Robison Junior High School is not the only school in Las Vegas that is the subject of a potential urban legend or haunting. On the other side of the city, there have been stories of yet many recollections of hauntings. The Hyde Valley Middle School was the neighboring building of a home that was soon transformed into the Little Choo Choo Daycare. The daycare in its own right has some stories of the most unfortunate events. In one such instance, it was said a young boy that attended the daycare was hit and later crushed to death under a toy train. Around the same time, it was also said that a teacher or staff member at the daycare committed suicide while on the job.

As of today, there have been no on-site deaths that have been reported at the school. There has also been no known timeframe between when the first haunting occurred. The events surrounding the school may still be a matter of dispute regardless of how much new information comes to light. Yet, there may be enough concrete evidence to further confirm that the haunting of the Dell H. Robison Junior High School. But the lack of evidence of who the spirit belongs to makes it a lot easier to dispute.

Is it still a place worth visiting?

The question that is often asked about the sites of apparent hauntings is this: is it worth the time to visit a place where a possible haunting occurred? In this case, there’s a good chance that you may experience some paranormal activity depending on the day. But it would not be the smart thing to just waltz right in and ask about ghosts during regular school hours.

Considering the number of stories told mostly by students, it’s highly unlikely that the spirit of the janitor will be visiting you at some point in time. The spirit may just be visible to the younger children of Las Vegas, especially those who are new students at the school. What you might do instead is visit the public library in Las Vegas and possibly do some research on what might have happened at the school. Especially during the times when there was no Internet yet.

While a school in suburban Las Vegas may not be the ideal tourist attraction for people out of town, the interest in it can still be enough by the stories of eerie, creepy feelings, and ghostly presences that have been reported by former students of the school.

While the Dell H. Robison Junior High School haunting stories may continue to circulate, it may be likely that the spirit might not be at rest any time soon. While the stories may be told repeatedly, the verifiable evidence may not be known to the public unless discovered. But it remains as one of the creepiest and haunted places in Las Vegas. While kids in the eastern half of Las Vegas are getting the education of a lifetime, they may never know that the janitor that was known for keeping the school clean may still wander the halls, whether you see him or not.