If you are familiar with some of the sights of Las Vegas, then chances are you may have heard of Bally’s Hotel and Casino. It is considered to be one of the most popular places to stay and visit while you are in Sin City. But to some paranormal fanatics, it might be a good place to check out some good old-fashioned paranormal activity. Word on the street is that there may be some presences still looming about nearly 40 years of a tragic event that had taken place. It may be a no-brainer for you to know where to stay in Vegas (but don’t consider this our suggestion on where to stay). But if you want to get lucky in terms of making money or seeing a specter or two, this might be the place to check out. Let’s dive in on what this place is about and how it’s halls might be quite haunted.

What Is Bally’s Hotel and Casino

Bally’s Hotel and Casino opened its doors on December 5, 1973 under the name “MGM Grand”. Today, it stands as one of the most popular sites in all of Sin City. Before the opening of Bally’s, its current site was known to house the Bonanza Hotel and Casino. The Bonanza was a fixture on the Las Vegas Strip throughout most of the 1960s and early 1970s. On the day of its opening, it was considered to be one of the most expensive properties in the country. The building project was said to range well over $100 million. The structure was also known to have been slightly larger than the Empire State Building in New York City.

Bally’s Hotel and Casino were also known for hosting some of the best talents in the world (even on Opening Night). On their first day of business, Dean Martin was the opening act to help christen the new hotel and casino that was at one point one of the true kings of Vegas. Bally’s have enjoyed great success throughout the 1970s. But a tragic incident would also leave a blemish on Bally’s illustrious history. 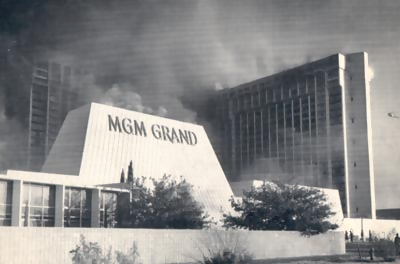 On November 21, 1980, a catastrophic fire that originated from the MGM Grand restaurant managed to travel up to some of the higher floors of the building. Except for a tower that was currently under construction at the time, most of the floors were badly damaged. It was considered one of the worst fire disasters in American history. About 87 people were killed and over 600 were injured as a result. The damaged floors were newly renovated and were reopened along with the newly built tower the following year.

Because of the fire and the large death toll that followed, the MGM Grand and other hotels across America have started implementing fire safety plans that ensured that all of their guests and staff were able to vacate the premises immediately and thus preventing any injuries or fatalities as a result. The fire was caused by issues regarding the restaurant’s electrical system. To make matters worse, the kitchen did not have a sprinkler system in place nor were there any smoke detectors installed. The entire hotel itself did not have a fire alarm system anywhere in the hotel. The only time an alarm was sounded was for security (i.e.–robbery, burglary, etc.)

Because of the high-end decor that saturated the restaurant and the surrounding areas, the fire was able to spread quickly into other parts of the building. The flames were able to cover at least 15 to 19 feet of space per second.

One of the major causes of death was smoke inhalation. One of the firefighters had recalled seeing unusually black smoke. The smoke was a toxic mix of chemicals from the hotel’s material and carbon monoxide. This deadly combination may have hastened the deaths of many of the victims. The smoke also found its way through the hotel’s ventilation system and also traveled up elevator shafts and staircases.

One of the other reasons why the number of fatalities was so high was the design. The building appeared to have no means of escape in the event of a fire. Without the combination of an appropriate fire safety system or any means of escape in the event of one, it was a death trap that was waiting to fulfill its purpose. Sure enough, it did just that in the Winter of 1980. Even today, the place may be haunted by some of the specters of those that stayed in the hotel on the day of the fire.

The Aftermath Of The Fire

The Grand MGM Fire would lead to an implementation of how hotels across the country (and the world) would handle such fire situations and preventing a disaster like this. This included implementations of sprinklers, fire alarms, and even designs that allowed users the means to escape safely in the event of a fire.

For the Grand MGM, this would have been a preventable tragedy that had an adequate fire safety system have been in place. In the end, it would lead to lost lives and lost money for MGM Grand. As expected, the families of the victims sued MGM Grand and were awarded over $200 million in damages. The building was cited 83 times for code violations. Also, no criminal charges were filed. However, Fred Benniger, the owner of the MGM Grand at the time was warned by engineers that a fire system should have been placed. At the time of the hotel’s construction and eventual opening, many hotels across America and the world had already installed a fire safety system or were in the process of doing so.

From MGM Grand to Bally’s

Five years after the fire and reopening, MGM Grand was sold to Harrah’s and was later named Bally’s. Today, the newly renovated building not only has an adequate fire system but also enjoys massive success as a popular tourist spot. The MGM name had eventually relocated to the southern end of the Las Vegas strip. Like Bally’s, the new MGM is a place that is home to many entertainment options offered to those living in Vegas or spending a few days as a tourist. Though they are still enjoying success to this day, the name will still be associated with one of the worst hotel fires in American history.

Bally’s was also the site of some notable TV shows and movies. While it was known as MGM Grand, the Dean Martin Celebrity Roast was filmed between 1974 and 1984 in the hotel’s Ziegfield Room. Regular fixtures were Don Rickles, Frank Sinatra, and future president Ronald Reagan (who made an appearance shortly after finishing his second term as the Governor of California).

Before the name change, the MGM Grand was also the site of another tragic event (of the fictional kind). It was there where the fight scene between Apollo Creed and Ivan Drago was filmed for Rocky IV. Creed would meet his untimely demise mid-fight against the Russian superhuman, leading to the eventual fight between Rocky Balboa and Drago himself.

As Bally’s began to take shape under its new identity, the fire remains fresh in the minds of many locals. It also comes as no surprises about what some of the guests have reported while staying at Bally’s. And it has made some guests feeling a little uneasy even after checking out of the hotel. While you may not see the apparition of a fictional character dancing around with boxing gloves and patriotic clothing (as Creed did in the Rocky movies), you will likely see the apparitions of those who were unable to get out of the smoke-filled rooms and hallways in time.

With the death of 87 people being the dark cloud that hangs over Bally’s, there have been past guests that have recounted some stories that left them feeling weirded out during their stay. One of the most common reports were the sounds of coughing and weeping coming from random parts of the hotel hallways and rooms. As far as they knew, none of the rooms where the sounds originated from were occupied.

Some have seen apparitions appear in various areas of the hotel — more specifically the halls where the fire reached. There have been reports of specters gambling in the casinos or wandering around the stairwells and elevator shafts where some of the deceased were found after the fire. Some of the spirits are rumored to be angered by their untimely and preventable deaths. This is a sign that they may be in search of some closure and finally accepting their destination to the other side.

The Bally’s Hotel and Casino is still a place where many flock the world over. While many find it as a nice place to stay, you may be one of the handfuls that may know the story about one of the worst tragedies in America. If you decide to stay here, don’t be surprised if you see any specters or hear any phantom noises coming from the rooms next door.